All about the Dotonbori 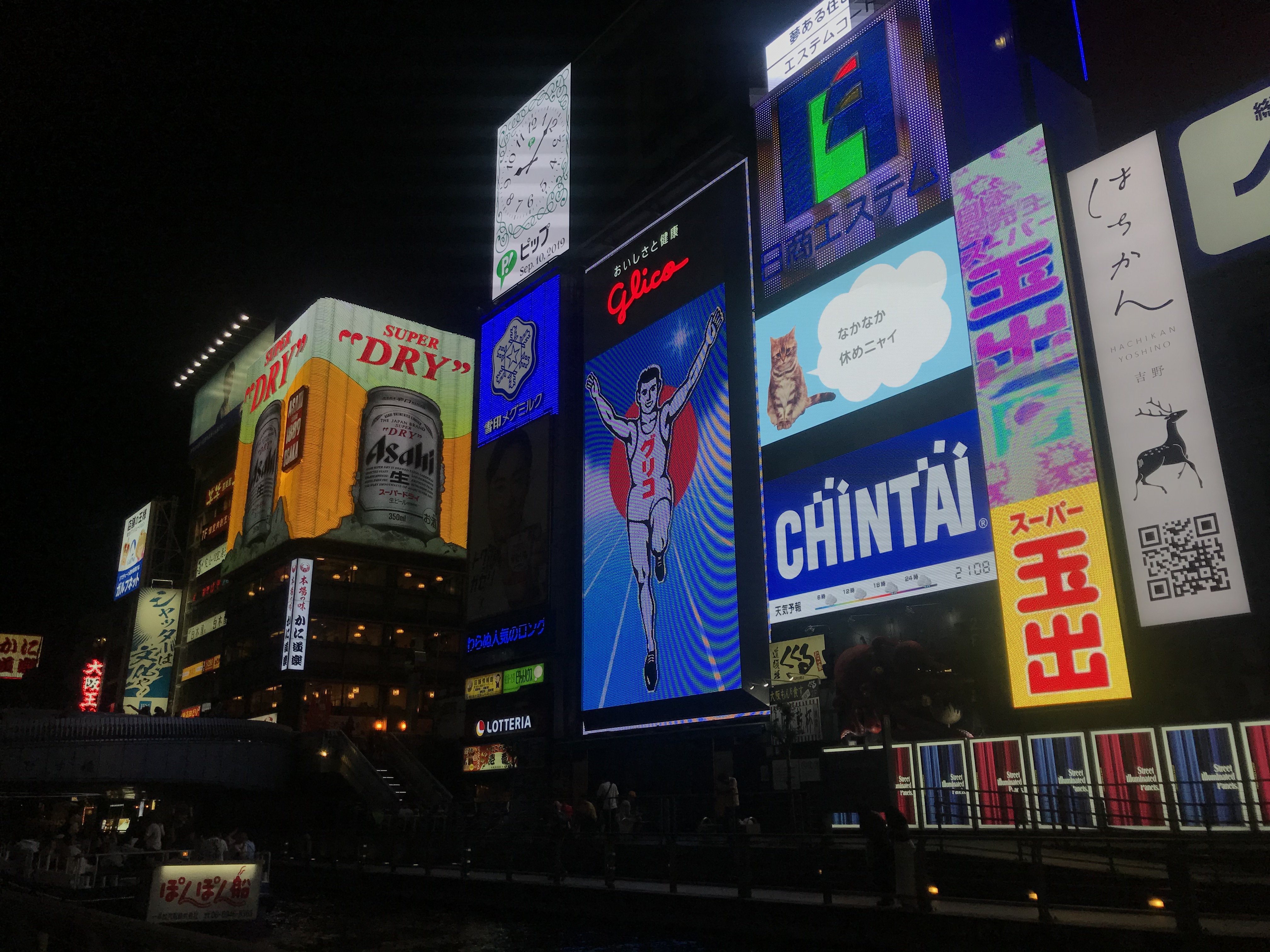 Our kimono photo studio in Amemura, central Osaka, is a short walk away from the Dotonbori. It’s a name for both the canal running through Namba, and the general area around it.

You might sometimes hear people call it ‘the Dotonbori river’. But it’s definitely a canal – the ‘bori’ (堀) on the end is the kanji for canal. Osaka locals also nickname it ‘Tonbori’, or write it as ‘Dotombori’ with an ‘m’ like ‘Namba’.

The ‘Doton’ bit comes from the man who started digging the canal out in the 17th century, Yasui Doton. The plan was to link more of Osaka’s rivers together. He was sadly killed in battle before it was finished, so his cousins took over, completed the work and named the canal in his memory.

Water that flows through the heart of Osaka

The canal runs west to east underneath several bridges, including Dotonbori Bridge to the west and the famous Ebisubashi (‘bashi’ means bridge). It’s nearly 3km long in total, and you can walk alongside for around 2km.

On a stroll past the water, you’ll see many of Osaka’s famous sights and landmarks. The iconic Glico Man sign, the giant ferris wheel above the Don Quixote store, long queues for takoyaki and ramen, and Tonbori River Cruise boats.

A popular side street runs parallel to the canal’s south bank. This street’s also partly taken the name ‘Dotonbori’, from the west exits of Namba station to the Sakaisuji main road near Nipponbashi station. It’s got restaurants, cafes, hotels, and one of Japan’s trademark convenience stores.

In Osaka, you don’t mess with the fried chicken

As a slice of water in Osaka’s vibrant, neon landscape, the Dotonbori canal’s carved a place in Japanese history. It’s also involved in a long-running Kansai legend – a baseball curse.

Back in 1985, the Hanshin Tigers – Osaka’s team – won the Japan Championship Series. When the team wins, fans have a tradition of celebrating with a jump into the canal. That year, a statue of KFC’s Colonel Sanders was also thrown in. (They thought it looked like one of the players.)

The wet Colonel ‘cursed’ the Tigers, and they didn’t win another championship series for 18 years. Not only that, they finished in last place 10 times – they’d only come last once before that, in 1975. It’s not the canal’s fault, of course! But it felt like that deep water was hiding an angry Colonel.

In 2009, the statue was found and fished out of the Dotonbori. The Tigers had won the league twice before that happened – in 2003 and 2005 – but the Colonel’s recovery had fans breathing a sigh of relief. And for the record: there is no longer a KFC in the Dotonbori area.

Here’s what to do when you’re on the Dotonbori

We’ve got some great ideas for a day out in Namba: